Niccolò Govender Rossi is one of the main characters in Baby. He is portrayed by Lorenzo Zurzolo.

Niccolò grows up in Rome. He is Camilla's brother.

Though he's dating a popular girl, Virginia at school, he's also having a top-secret affair with Chiara.

Chiara no longer wishes to continue the affair with Niccolo, which leaves him feeling emasculated. Having difficulty accepting the rejection he still seeks out Chiara. When she finalizes her wishes, he is devastated and confides in his sister, Cami, who happens to be Chiara's best friend. Cami feels betrayed by the whole event as she is someone who didn't keep secrets from her best friends. Eventually the whole affair between him and Chiara gets publicized.

Parallel to these events, Niccolo clashes with the new guy at school, Damiano, who Chiara is taking an interest in. As a form of backlash towards him, Niccolo vandalizes the headmaster's office, using Damiano's hoodie as a disguise.

The truth never comes out about the situation and the only other person who finds out the truth is his sister. Cami is unforgiving of Niccolo's actions because she has feelings for Damiano.

In attempt to make it up to her, Niccolo asks Monica to have Damiano come over for dinner with his family. Cami and Niccolo do patch up their relation.

Throughout the season, Niccolo also lusts after Monica, a sports teacher at his school, who is the Damiano's step-mother.

At the end of season 1, Niccolo gets back with Virginia.

At the start of the season we see Niccolo trying to be a better boyfriend to Virginia.

However, he quickly goes back to cheating on her with their teacher Monica.

After a discussion with Virginia about Brando and Chiara's relationship, the two break up, but he is soon faced with the news of Virginia's pregnancy.

At the end of Season 2, he is seen going to Manuel's (Fiore's rival) club.

At the start of season 3 he is seen helping Chiara but with a discreet identity.

He helps Chiara and Ludo find Natalia and comforts her after she sent away one of the men who wanted to sleep with her.

At the end of season 3 Chiara end up going to a group home and it is shown that Niccolo visits her as a supporting friend.

Niccolo is good-looking. He is tall, with wavy light brown hair and big eyes. 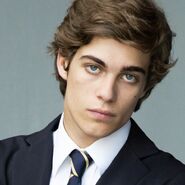