1 • 2 • 3
Ludovica Storti is one of the main characters in Baby. She is portrayed by Alice Pagani.

Ludovica grew up in Rome with her single mother.

She does not have a good relationship with her dad, who refuses to pay for her tuition and never visits her.

Ludovica was born on February 20th 2002. She is having a hard year. She is struggling in classes, her single mother is unraveling, her ex Brando released their sex tape, and her father won't pay her school bills. At first, Ludo turns to partying. Then, when she becomes friends with the owner of a night club, Saverio she's persuaded/manipulated into trying prostitution.

Ludovica strikes up a friendship with "good girl" Chiara. They start to party together and eventually escort together, which is scary but thrilling. Ludovica is happy to have all the extra money and she feels powerful.

Ludo also has a brief romance with Saverio's second-hand man, Fiore, who manipulates her and partially starts to fall for her. He is one of the reasons that she gets into escorting in the first place. She starts to fall for Fiore, but ultimately cuts it off realizing that he is trying to manipulate her.

Ludo continues with prostitution, but without Saverio as the middle man, which has its pros and cons. She meets with several clients, although things start to go wrong. One client doesn't pay her the money he owes her. Another starts to stalk her, showing up at her house and her school.

Ludo and Chiara's friendship still is going strong, except for a moment here and there when they start to doubt each other. Ludo starts to befriend Damiano and Fabio. She is lost again this season.

Ludo's mom starts dating the headmaster at her school. Alberto Fedeli and Fabio move into Simonetta and Ludo's house, which at first is very upsetting for Ludo but eventually she and Fabio form a strong friendship and she seems happy to have him around.

Ludo has a weird encounter with the new teacher at school. He had been a client (who ultimately turned her down because she is a minor). He starts to become a beam of support for her, helping her with the stalker situation and giving her advice. She turns to him several times and even goes to his house one night for comfort. While she briefly falls asleep, he ends up kissing her, and she runs off in tears.

At the end of Season 2, out of fear for her life because of the stalker, she confides in Chiara who understands her reluctance of going to the police about the situation. Chiara encourages her to find protection from Fiore. She shows up at the apartment that Fiore had rented for the girls to meet clients at. Fiore is relieved that Ludo is back in his grips again.

Fiore goes on trial and loses, but Ludo's mom, Simonetta also ends up in jail because she was aware of her daughter's prostitution.

At the end of season 3, Chiara and Ludo get matching teddy bear tattoos. In the end, both girls are seen looking down at their own tattoos with a look of fondness and melancholy. It is alluded that the two girls have lost contact with one another.

Ludo ends up going to comics school in Paris at the end of the series.

Ludovica is a girl which has a petite and attractive looking appearance, freckled and pale white skin, green eyes, short black hair with bangs. Like Chiara and her classmates she often wears her uniform or dresses fancier when it comes to going to clubs or parties. 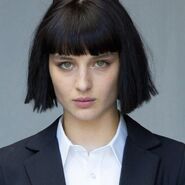