Fabio Fedeli is one of the main characters in Baby. He is portrayed by Brando Pacitto.

Fabio grew up in Rome, Italy. He is the son of the school's principal.

He lost his mother when he was young and was brought up solely by his father, who is a strict and overprotective parent.

Fabio is close friends with Chiara and Camilla. The three of the hang out often. Fabio has a secret that he keeps form most throughout the season - he is gay.

Fabio has a college-age boyfriend, but has to face constant bullying at school due to his coming out. In the first episode of this season we see him getting harassed at school by the group of popular boys, Damiano quickly enters to save him but later on he would have to face Brando alone, when Brando demands he opens the bathroom door.

At the end of episode one Brando kisses Fabio but later denies that it meant anything by the beginning of episode two after Fabio confronts him. Fabio has a talk with Ludovica's mother about relationships and after the talk he decides to kiss Brando, him and Brando end up making out in the bathroom and start a secret relationship.

During episode three Fabio is attacked by the popular group of boys again and was especially hurt when Brando didn't defend him. Fabio later went to a party trying to talk to Brando about what happened but never got the chance due to Brando's stubbornness. It was obvious their affair was over and Fabio in the meantime was focused on getting his college-age boyfriend, Alessandro, to forgive him and get back together.

At the end of the season Brando tries to get Fabio to agree to continue their affair, but Fabio was too hurt and needed someone who would be able to protect and defend him.

Fabio is very close with Ludovica this season, and has officially gotten back together with Alessandro.

While at a club with Alessandro, Fabio thinks he sees Brando but then realizes that it was all in his head. Fabio later decides to visit Brando but is then pushed away but Brando father.

Fabio eventually breaks up with Alessandro and goes to see Brando and the two make love.

At the end of the season Fabio is seen with Brando as a happy couple.

Fabio is short with dark, brown hair and pale skin. 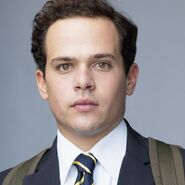