Damiano Younes is one of the main characters in Baby. He is portrayed by Riccardo Mandolini.

Damiano grew up with his mother on the other side of town in Rome. He is the illegitimate child of the Lebanese ambassador to Italy, but he didn't have a relationship with his father until his mother died.

When his mother dies suddenly, Damiano moves in with his father. He is brand new to the private school, and the lifestyle of the people on this side of Rome. Damiano occasionally deals drugs on the side. Both Chiara and Camilla have a bit of a crush on him. He starts to date Cami, even though he and Chiara share sexual tension. Eventually, things with Cami don't work out and Chiara and Damiano kiss.

At school, Damiano doesn't get along with most of the other students. He isn't happy to be in the fancy private school, which is completely different from the school and town he grew up in. Also, his interest in Chiara makes Niccolo hate him.

At the end of Season 1, Damiano, trying to protect Ludovica, gets into a car crash, accidentally killing Saverio.

In Season 2, Damiano and Chiara start dating. They are in love and flirt at school and out of school. He is trying to clean up his act, but Fiore is blackmailing him over the car accident. He works on the side for Fiore, driving and protecting the prostitute, Natalia. He doesn't tell Chiara about his secret life, til events come to a head.

Fiore lets him off the hook and makes it appear to be because of a misbehavior. When it is actually because of a deal Chiara made with him. Damiano stops working for Fiore, but still expresses to Natalia that he wants to work for him.

Out of the blue, Chiara breaks up with Damiano, which breaks his heart. He is confused as to why. He pays to sleep with Natalia to try to get over Chiara.

Chiara confesses to Damiano that she still likes him and they sleep together. But she leaves him a note saying that she wants to move forward with him, but she's not as perfect as she seems.

At the end of the season, he realizes someone is following him and taking photos. Eventually he finds out that his father hired someone to look after him, and Chiara and Ludo. He sees pictures of Chiara as a prostitute and starts tearing up, unsure if he can move forward knowing this.

In the last season, Damiano and Chiara end up as friends. Damiano meets a new girl at school and they start dating. Damiano's father kicks him out and he ends up moving in with Monica, his stepmom.

Damiano has dark brown short hair. He is good looking, of medium height, and often wears a school uniform.

"The past doesn’t disappear. It lingers inside us, in our present." ― Damiano

"The idea of going forward is an illusion. Just like Einstein said. Things change on the surface, but deep down they remain the same." ― Damiano

"What if pain isn’t an obstacle to overcome? Maybe it’s just a road you walk on." ― Damiano 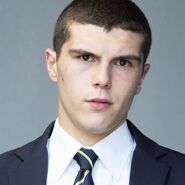