1 • 2 • 3
Brando De Sanctis is one of the main characters in Baby. He is portrayed by Mirko Trovato.

Brando grew up in Rome, Italy, in a wealthy family.

Brando is a student at the school. He's good friends with Niccolò. He used to hook up with Ludovica and he released their sex tape to the school, embarrassing Ludovica. He is one of the main antagonists of the series.

Brando is again an antagonist of this season. At the beginning of Season 2, he is bullying and abusing Fabio along with his friends because Fabio is gay. Eventually, he kisses Fabio revealing that he is gay. They start a secret relationship, even though Fabio has a boyfriend and Brando is not out of the closet.

Brando continues to bully and abuse others, including street prostitutes, Fabio (even after they start their relationship), and Chiara. Brando figures out that Ludo and Chiara are prostitutes. He takes photos of them with different men and eventually follows Chiara to a club, where she sleeps with a politician. He steals a room key and enters the room, filming them having sex.

In fear that others (and especially his father) think he is gay after Fabio spray painted "Brando Gay" on the school walls, he blackmails Chiara into dumping Damiano and going out with him. She even meets his family.

Eventually, Brando goes too far and films a video where he and Chiara appear to be involved in a sexual act and reveals it to the school.

Chiara later get Brando to delete the tapes, blackmailing him with a video showing his father having sex with a minor.

At the end of Season 2, Brando asks Fabio to forgive him and continue their affair, but he is rejected when he refuses to come out, as per Fabio's request.

He is last seen apparently overdosing after an encounter with a prostitute.

Brando is seen spending the majority of his time at home, recovering from his drug overdose from last season. He is shown to be as angry as ever initially, mainly towards his father, especially when his father sends Fabio away who came to see if Brando was okay.

Brando later sends the police the video of his father having sex with Sofia, and gets him arrested, then tries to arrange to see Fabio. Initially, the two have a hard time meeting, until Brando goes to a party Fabio is at, and Fabio initially rejects him, claiming he only went to see him to see if he was okay, not to restart their affair, and it is getting clearer that Brando is in the process of admitting his feelings for Fabio.

Eventually, Brando confesses to Fabio that he meant to overdose, that he broke down after falling out with Fabio and his father. Fabio eventually breaks up with Alessandro, and goes to see Brando, and the two finally make love in Brando's bedroom, and Brando stands up to his father, and publicly comes out with Fabio as a gay couple at Collodi by kissing him in front of the school.

Brando later helps Chiara and Ludovica at trial, and is afterwards seen finally happy with Fabio as a couple. 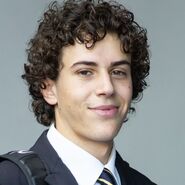